Statement in Solidarity with Treaty One Territory Indigenous Women, Girls, and 2Spirit People 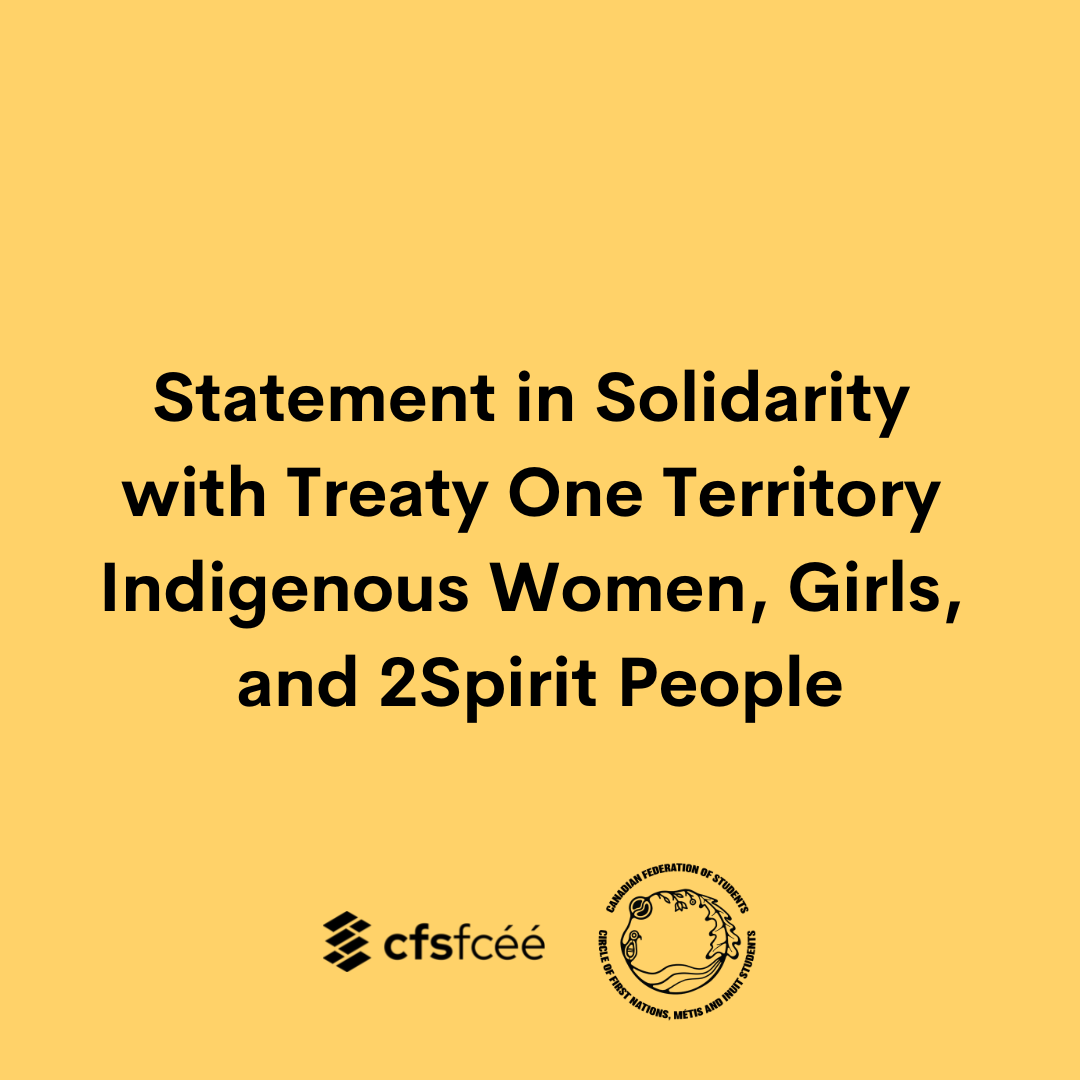 Statement in Solidarity with Treaty One Territory Indigenous Women, Girls, and 2Spirit People

OTTAWA—The Canadian Federation of Students stands in solidarity with the Indigenous communities in Treaty One Territory as a serial killer has targeted and taken the lives of four Indigenous women; Morgan Harris (39), Marcedes Myran (26), Rebecca Contois (24), and a fourth victim who has not yet been identified, but named and addressed by Elders as Mashkode Bizhiki'ikwe, or Buffalo Woman.

As news of the murders have come to light over the past six months, the Winnipeg Police Force have acknowledged their ability to perform a search of the landfill, however, had initially refused to do so, and are currently delaying the search of the bodies. By putting off the search for the bodies, the Winnipeg Police Force are further delaying the closure for the families and communities of the victims who need to properly begin their grieving process. Indigenous people demand dignity for their kin, a dignity that is currently not upheld by our current societal institutions.

The Federation calls upon the Manitoba provincial government and Winnipeg Police Force to expedite the search process to find the bodies of Morgan Harris and Marcedes Myran, which are believed to be located in the Prairie Green landfill in Rosser, Manitoba. The search is imperative for the future of reconciliation and building trust with Indigenous peoples across Turtle Island. Offering condolences to Indigenous communities and families without action does not provide Indigenous women and girls protection or safety.

The Federation would also like to note that just a few days ago, Kayla Rae, a member of North Spirit Lake First Nation in Northwestern Ontario, passed away in a Winnipeg transit shelter. Kayla spent much of her time supporting her community and unsheltered community members. Kayla was found covered with several blankets after the temperature had dropped below freezing. The Federation demands the provincial governments ensure more resources for unsheltered people are made available during bouts of extreme weather, to ensure no more lives are lost.

These are not isolated incidents and are a reflection of deeply rooted anti-Indigenous issues in so-called Canada. There is a historic and ongoing epidemic of violence against Indigenous women and girls which has yet to be given the level of attention or priority that it deserves. It is disheartening that the labour and organizing efforts fell on the affected families and communities to urge the powers that be into commitment on this action.

The Canadian Federation of Students will continue to support the National Circle of First Nations, Métis and Inuit students in their work to support Indigenous students across so called Canada and in highlighting and supporting the struggles of Indigenous communities. The Circle is committed to fighting for accessible housing and education and for the protection of all marginalized communities across Turtle Island.