The Federation's 2022 Year In Review 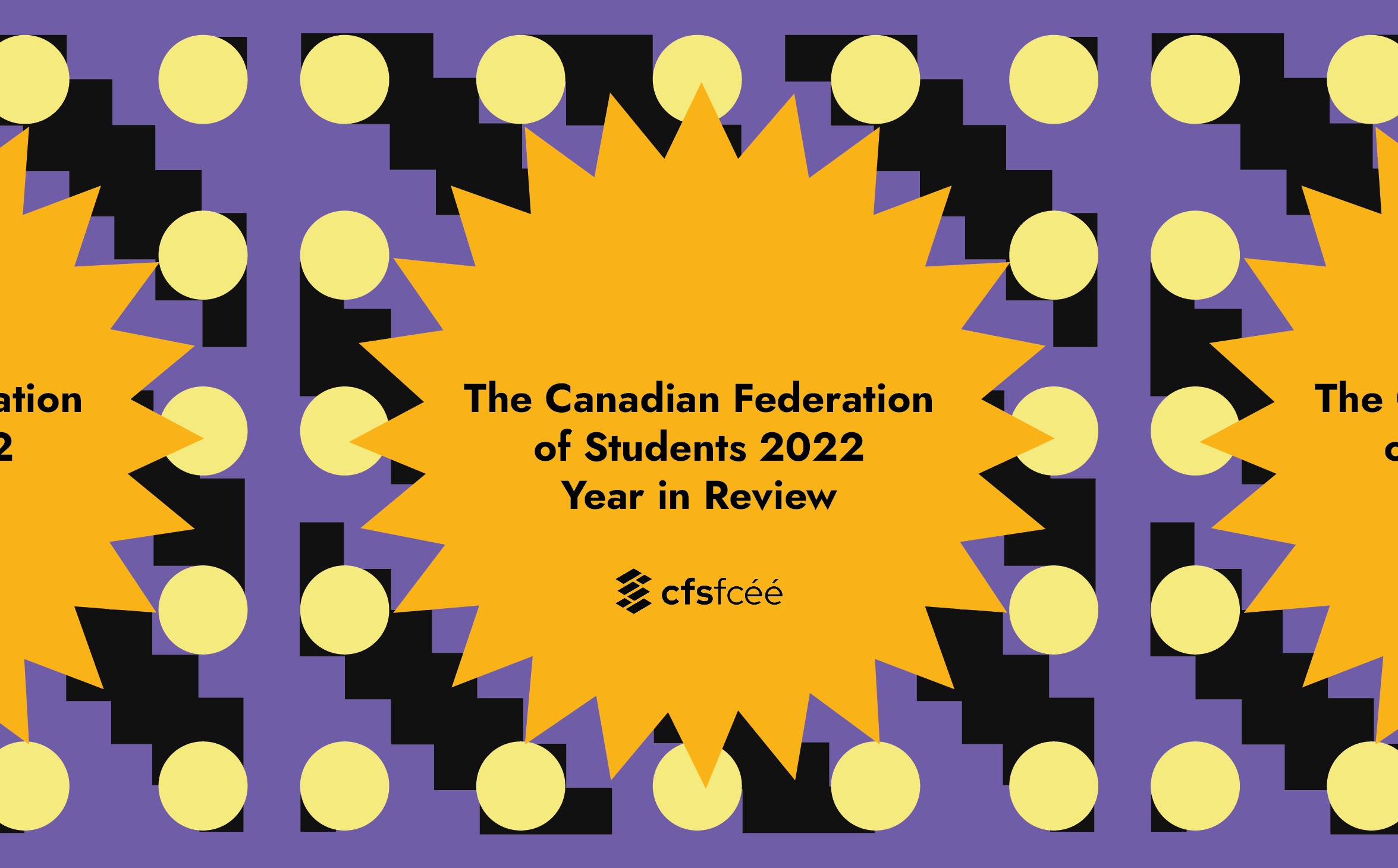 The Federation's 2022 Year In Review

With exam season almost wrapped up and the end of the year looming, we thought this would be a great time to reflect on the year we’ve had in the student movement.

From big wins like lobbying Provincial and Federal governments, to advocating for a national vision for post-secondary education, to smaller ones like launching this national newsletter—we’re really proud of all we as a student movement have accomplished this past year. Whether it be a federal win or gains in the provinces, an achievement for students in one part of the country is a win for students everywhere.

Scroll down for some of our favourite moments from this past year and to catch up on what we here at the Federation have been up to throughout the year of 2022.

In February, the Federation held our annual lobby week at Parliament Hill, meeting with MPs, Ministers, Senators, and other government representatives to discuss the biggest challenges currently facing students across the country. Delegates from across the country lobbied Members on 4 key recommendations:

Tuition is the largest barrier to accessing PSE in Canada. We are calling on the continuation of the doubling of the Students Grants Program, past its expected end date of 2023.

Streamline and simplify the path to citizenship by expanding permanent residence status and protections to all international students.

Allocate funding directly to subsidizing the upfront costs of regular mental health services for post-secondary students, such as one-on-one counselling or therapy through community-based and culturally relevant service providers.

In June, students from coast to coast came together in Piktuk, Mi’kma’ki (Pictou, Nova Scotia) at the 2022 Atlantic Racialized and Indigenous Students’ Experience (RISE) Forum.

Together, delegates, presenters, and organizers safely celebrated coming together to heal, connect, and learn in a time when our communities needed it most. We held space for one another, heard perspectives we otherwise would not have had the chance to learn from, and built lasting friendships and meaningful connections.

The Ontario Skills Development Symposium, held in June, was an opportunity for students from across the province of Ontario to come together and build skill sets that can be used to support the day-to-day operations of their students’ unions.

This summer, CFS-Ontario hosted Ontario Skills to empower elected representatives, staff and volunteers with the ability to effectively engage their membership, better understand the role of students’ unions and successfully and responsibly manage the members they represent.

Students engaged in sessions which ranged in subject from Funding for PSE: The Case for Free Education, Organizing for a Better World: Anti-Oppression Workshop, and Planning Successful Events.

In September, the Nova Scotia Department of Advanced Education and the Department of Health and Wellness announced an update to regulations under the Health Services and Insurance Act (HSIA) to allow international students with a study permit and individuals with work permits to be absent from Nova Scotia for more than 31 consecutive days without losing their Nova Scotia Medical Services Insurance (MSI) coverage—thanks to the advocacy of student leaders at CFS-Nova Scotia and across the province of Nova Scotia.

International students in Nova Scotia are still not eligible for MSI until 13 months after their arrival to Nova Scotia, forcing them to purchase expensive private health care coverage. Prior to the newly announced update, international students could not leave the province for more than 31 days without resetting their wait for coverage. This meant that students who left the province or country to work during the summer term might never have qualified for MSI during their degree.

Newfoundland and Labrador Day of Action

The Day of Action demands included:

The Day of Action called on students in NL to go “All Out Like ‘99”. Why? In 1999, students in Newfoundland took action and won a tuition freeze. Brian Tobin, the Premier at the time, was quoted as saying “the students made it impossible for me not to freeze tuition fees.”

In November, thanks to the countless efforts of student leaders at CFS-Manitoba and across the province, the Provincial government of Manitoba has signalled a step back from performance-based funding (PBF) reforms, to reassess how to best support students and faculty.

While this was a big win for the students of Manitoba, the fight is far from over. The government is still prioritizing private sector needs over a comprehensive and holistic student experience. This push back in the government’s agenda was only made possible by students and faculty uniting together with a shared voice and condemnation for PBF models on education. CFS-Manitoba continue to stand in solidarity with sector partners as we push for a fair funding model that best serves all students in Manitoba.

For over three decades, the Federation has called for the end of the predatory practice of collecting interest on student loans, and this long-overdue achievement is a direct result of the combined efforts of student leaders, activists, and advocacy groups who never stopped fighting.

While this victory ushers in significant improvements to Canada’s student financial aid system, we continue to advocate for a national vision for free and accessible post-secondary Education For All.